A public consultation has started into plans to make massive cuts in Devon & Somerset Fire & Rescue Service - tell Politicians NO more cuts in the Fire Service. 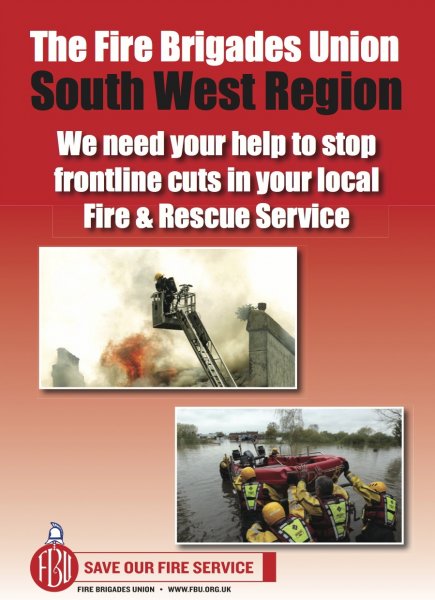 The Fire Brigades Union is urging the public to protest against the most savage cuts ever planned to their local fire and rescue service.

The coalition government has reduced its grant to Devon and Somerset fire and rescue service by 10.3% for the year 2013/14 and 7.3% for the year 2014/15. This means a loss of £3.4 million in the next financial year and £2.1 million the following, cuts three times more savage than any ever imposed on the service before, by any previous government, and gives the lie to Minister Eric Pickles’ claim that the fire and rescue service is somehow being protected.

On 18 January, the fire authority and fire service senior managers put forward proposals for public consultation, including a set of cuts that would see fire appliances removed from local communities.

The planned cuts include:

The FBU has organised a significant campaign of opposition and every member is being asked to play a full part. Leaflets have been printed which tell the public what the plans will actually mean and how dangerous the Union thinks they are. These leaflets are designed for use in local areas and although they have the same front cover, the text on the back is aimed at specific areas in Torquay - Ilfracombe - Taunton - Plymouth. There is also a "generic" leaflet for use throughout Devon and Somerset.  All these leaflets are attached, together with the front cover. Firefighters will be handing them out to the public and asking them to register their protest by emailing, writing or calling during the consultation. Your voice is important: if you live, work or visit Devon & Somerset then please have your say. Tell the consultation that there should be no frontline cuts in any of the following ways:

Further updates, information and campaigning events on this vital issue will be posted on our website and distributed via meetings, social media and email etc. Please follow us and keep up to date!